Cheers? No thanks! Low- and no-alcohol lifestyle booms

About 5 million people will drink their first beer or glass of wine in a month next week as “dry January” comes to an end. But for an increasing number of people it will be an entirely dry year, because low- and no-alcohol is now a fast-growing lifestyle choice.

Sales of beer and cider with less than 1.2% alcohol grew by nearly 30% last year compared with 2015 while demand for low- and no-alcohol wine was up 8%, according to analysis firm Kantar Worldpanel. The trend is creating a new market for major drinks companies, craft brewers and retailers.

While non-boozers were once limited to the grim choice of a decidedly uncool Kaliber, a juice or a lime soda, there there are now dozens of options on the market. Budweiser launched its alcohol-free beer in the UK in November, Heineken unveiled a no alcohol version of its beer last year, while Tesco introduced a choice of five wines with less than 0.5% alcohol before Christmas. Next month discounter Aldi is joining the trend, putting two low-alcohol wines on its shelves. 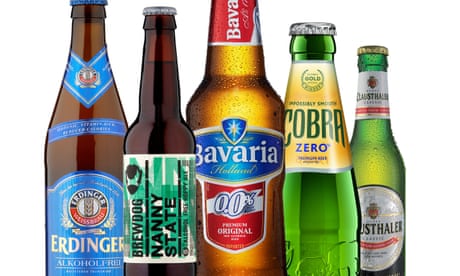 Tesco says its sales of low-alcohol wines have more than doubled. The supermarket’s wine expert Alexandra Runciman, says: “Consumption of alcohol in the UK down is down by 18% over the last decade and we’re seeing more customers looking for a quality wine-drinking experience without the alcohol.”

Drinking rates among British adults are at their lowest since 2005. A recent Office for National Statistics survey found the proportion who drank alcohol at least once a week declined from 64.2% to 56.9% last year. Almost 100,000 people officially signed up to the “dry January” challenge this year – about 40% up on 2017 – while millions more joined in unofficially.

The trend is particularly prevalent among young people: more than a quarter of 16- to 24-year-olds do not drink.

Stuart Elkington, founder of specialist online store Dry Drinker, says his sales have more than doubled in the last 12 months. He believes an improvement in the taste of low- and no-alcohol beers and wines has combined with a general desire to cut calories, be healthy and avoid waking up with a hangover.

The UK’s bestselling low alcohol beer is Becks Blue, but Elkington says British craft brewers, such as Big Drop and Nirvana, which both produce beers with less than 0.5% alcohol, are helping drive the trend because they focus on flavour.

“We do a lot of beer tastings and people say ‘goodness me it tastes like beer’. They are extremely surprised how good it can be. They used to boil the beer to remove the alcohol and it wasn’t good. But people have come up with modern ways of removing the alcohol that keeps the flavour,” he says.

“With 20 million adults in Great Britain happy to consider low- and non-alcoholic drinks, and with a number of recent high-profile launches in the zero-alcohol market, we expect this part of the alcohol industry to continue to thrive,” he says.

And there are signs that the no and low trend is moving beyond beer and wine.

Diageo, which makes Smirnoff and Johnnie Walker, last year bought a stake in Seedlip, a start-up company producing an alcohol-free spirit designed to be drunk instead of gin in cocktails. It was the drink conglomerate’s first investment in a non-alcoholic drinks company in its 258-year history.

Ben Branson, who started Seedlip just over two years ago, says sales have increased tenfold in the last year, with stockists including Tesco and top cocktail bars such as American Bar at The Savoy hotel in London.

Even more choice for cocktail fans could be on the way.

A company called Alcarelle, founded by scientist Prof David Nutt from Imperial College London, is in pursuit of the holy grail of the drinks business: a hangover-free alternative to alcohol.

Low-alcohol wine is not wine, it’s grape juice. Where’s the joy in that?

Nutt says the compound, which he began developing in 2005, is designed to mimic the positive aspects of alcohol – such as making people feel more sociable and relaxed – but he has “engineered out the toxic effects … It won’t make you throw up and you can’t overdose.”

Nutt believes the international alcohol industry has woken up to the need for change as people search for healthier options.

“Scientists have been saying ‘this is the future, you can’t keep selling something that is known to be toxic’ but we have made no progress until the last couple of years.

“Now tobacco is being replaced by e-cigarettes and people have seen how a disruptor can take on a Goliath like tobacco.” The drinks conglomerates, he says, “have seen what could happen to them”.

As nice as it is to have low to no alcohol choices available, alcoholics and those with similar addiction issues are best advised to steer clear of the “low alcohol” products–enough of anything can be a problem; why take any risk?