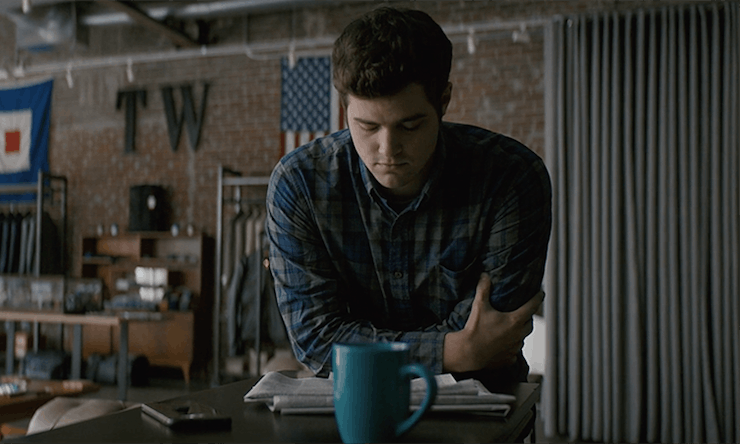 Before writing and directing her new short film Dear You, Kathryn Prescott had no idea that most people struggling from opioid addiction were under the age of 25. It wasn’t until a visit to the Homeless Health Care Los Angeles foundation in downtown LA in 2013 that she noticed a map of the city tacked to a wall, nearly covered in pins from edge to edge. “I asked them what the pins meant,” Prescott recalls solemnly, “and they said each one stood for someone who’s life had been saved with an overdose reversal drug called naloxone. I thought, ‘wow, this many people are experiencing [opioid addiction] that now they have to distribute a reversal drug?’ That was really the start of me becoming interested in the scope of the epidemic.” It was after this, Prescott tells Bustle, that she began to look into ways to raise awareness about the epidemic that, according to the Center For Disease Control, is responsible for taking the lives of 115 Americans every day.

Prescott is best known as an actress for her work in Skins and Finding Carter, so she was keen to use her platform to raise awareness about the opioid epidemic, especially after realizing that most of the existing awareness efforts were hardly targeted at the largest age group battling the addiction. “I was speaking to a health care friend of mine about past awareness efforts, and we just noticed a lot of them were not aimed at younger people,” Prescott explains. “When they were, they were often showing opioids and the people that use them in a stereotypical light — almost judgmental.”

It was then that Prescott decided to change the narrative around how opioid addiction is portrayed by the media, and create something that portrayed the battle against opioid abuse that many between the ages of 18 and 22 are facing in silence. Released on Feb. 20 and written/directed by Prescott, Dear You is only just over four minutes in length — but in those four minutes, the short film offers not only a gut-wrenching, devastating look into one man’s relationship with his battle against opioid addiction, but also how, to people fighting any drug addiction, oftentimes the relationship they have with the drug is the most deeply intimate relationship in their life.

Dear You offers a portrayal of addiction, particularly opioid addiction, that is very rarely seen. Prescott reveals that with the short, she set out to create something “that showed a human story behind all the numbers and statistics of the opioid epidemic” rather than a typical PSA about addiction because “the isolation and loneliness which addiction is born out of” needs more light shed on it. She says she got the idea for a short film featuring a man narrating a letter to his addiction after reading real-life letters from people in recovery who had written letters to their heroin addiction.

Generally, anti-drug campaigns depict more graphic, physical representations of drug’s effects on the body, and portray those who are battling addiction as somewhat lesser, which can be hugely damaging to recovery efforts. As a 2017 campaign called Stop The Shame from Kansas-based drug and alcohol recovery organization First Call pointed out, those battling drug addiction need to be seen the same was as a patient in need of medical treatment, because the the stigma created by anti-drug PSAs can discourage those in need of help from seeking it. In Dear You, we don’t see so much as a mention of drugs until the very end; and even then, it’s the main characters loneliness and feelings of isolation that are most apparent.

“The idea that addiction is a moral failing or a choice has added to the shame and the stigma around it,” Prescott says. “This potentially means that those suffering from this find it hard to reach out for help because they have seen in the media, film, TV, and even in drug awareness campaigns, how people suffering from addiction are reflected in this negative light.”

While opioid addiction is hugely prevalent amongst young people between the ages of 18 and 25 (according to a study in 2016, risk of opioid addiction is 37 percent higher amongst young adults than it’s ever been in the past), it’s not referenced in the media all that much — and not only that, but its primary source isn’t addressed often either. Hearing the words “opioid addiction,” it’s easy to just think of drugs like heroin as the only source — but this isn’t the case whatsoever. According to the National Institute On Drug Abuse in 2016, the primary source of opioid addiction among people 18 to 25 is often prescription drugs, and the struggles often begin after someone is prescribed a powerful painkiller like hydrocodone, oxycontin, or codeine following an injury. “I’ve spoken to people who have gotten addicted to opioids because of an injury,” Prescott says, “and what they’ve said is, when you’re actually trying to come off [the prescription opioids], the pain gets worse than how it was to begin with. When you’re trying to come down from opioids, your body chemistry has changed, and it’s dependent on something that you’ve taken away. Now, not only do you have the chronic pain you had before, you’re now [also] going through withdrawal and worse pain.”

Drug overdose is now the leading cause of death for Americans under 50. Our short film highlighting the opioid epidemic’s devastating effect on America’s youth is now available on YouTube here-https://www.youtube.com/watch?v=LqvutLfksFE&feature=youtu.be … @TheHHCLA @BenWinch @katprescott77

This, she says, feeds a vicious cycle that many may not even realize has affected their lives one way or another. Prescott says that all cast and crew members who worked on Dear You had been affected by opioid addiction in one way or another, including herself. In her case, she reveals, it was her brother who silently suffered a battle against opioids following a back injury and subsequent surgery that left him in chronic pain — and, like many people whose friends and family suffer opioid addiction, she says his battle wasn’t apparent for years. “He was being prescribed incredibly strong opioids, and he was 17 at the time,” Prescott reveals. “He was in pain for years. We had no idea, that it was an addiction. As all opioids are, it was very similar to heroin. And I was really mad that we didn’t know what was going on — we just had no idea that he was being prescribed these medications again, and again, and again. Another surgery fixed the actual problem [in his back], but [the prescriptions] had become the problem in and of itself.”

She adds that her brother was successful in his battle against opioid addiction, but there are too many who aren’t as lucky to receive the support they need. With Dear You, Prescott hopes to change that.

Prescott adds that the website for Dear You will act as an “online resource center” of sorts to help people learn more about the opioid epidemic, as well as offer information for those seeking help with an addiction, or those seeking help for someone else battling an addiction. It will also include information about therapy options, which she comments is important because mental health conditions and addictions often go hand-in-hand. “[We’re directing] people to more in-depth websites that have resources about where you can get counseling, where you can find a therapist, where you can find a rehab center… we’re pulling all of the resources that we know about together to point people in the right direction.”