A nasal spray that delivers a natural painkiller to the brain could transform the lives of patients by replacing the dangerous and addictive prescription opioids that have wreaked havoc in the US and claimed the lives of thousands of people.

Scientists at University College London found they could alleviate pain in animals with a nasal spray that delivered millions of soluble nanoparticles filled with a natural opioid directly into the brain. In lab tests, the animals showed no signs of becoming tolerant to the compound’s pain-relieving effects, meaning the risk of overdose should be far lower.

The researchers are now raising funds for the first clinical trial in humans to assess the spray’s safety. They will start with healthy volunteers who will receive the nasal spray to see if it helps them endure the pain of immersing one of their arms in ice-cold water.

“If people don’t develop tolerance, you don’t have them always having to up the dose. And if they don’t have to up the dose, they won’t get closer and closer to overdose,” said Ijeoma Uchegbu, a professor of pharmaceutical nanoscience who is leading the research through Nanomerics, a UCL startup.

If the first human safety trial is successful, the scientists will move on to more trials to investigate whether the nasal spray can bring swift relief to patients with bone cancer who experience sudden and excruciating bouts of pain. 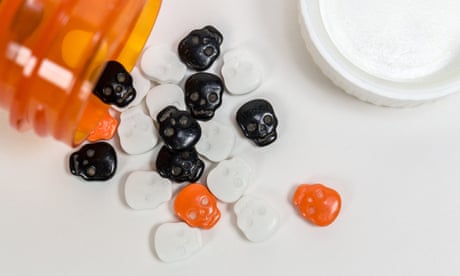 The search for the perfect painkiller

Uchegbu believes the approach is promising because natural opioids seem to work differently in the body to synthetic opioids, such as oxycodone and fentanyl, which are commonly used for moderate to severe pain. While the body quickly becomes tolerant to synthetic opioids, meaning patients need more over time to get the same pain relief, that does not seem to happen with natural opioids.

Scientists have long seen the potential for using natural opioids as painkillers, but have been thwarted by both the compounds and the brain. Inject natural opioids into the bloodstream and they are swiftly broken down in the liver. What is left faces another hurdle in crossing the barrier to the brain that is effective at filtering out the compounds.

Writing in the Journal of Controlled Release, Uchegbu and her team showed they could deliver pain-relieving levels of a natural opioid called enkephalin straight to rats’ brains by encapsulating the chemical in soluble polymer nanoparticles. The tiny capsules provided just enough protection for the opioid to reach parts of the brain where it could block pain perception. Once the particles had dissolved, the breakdown products were excreted from the body.

Uchegbu, who described her work at the Royal Institution’s Future Pharma eventin London on Wednesday, said that human trials would also reveal whether people experienced euphoria on receiving the nasal spray – a warning sign that patients might become addicted. The tests in rats found no evidence that the animals sought the drug out as a reward, a behaviour that is seen with addictive drugs, but more detailed studies are needed to be sure.

Researchers on the project hope the new approach will help fight the opioid crisis that has engulfed America in a wave of addiction and overdose deaths. More than 90 Americans die every day from overdoses on prescription opioids, now the greatest single cause of death among the under 50s. Some doctors now estimate that the crisis could claim the lives of half a million people in the next decade.

Lesley Colvin, professor in pain medicine at Western General Hospital in Edinburgh, said that intense, so-called breakthrough pain can often strike without warning in bone cancer patients. An ideal painkiller would act much faster than the fentanyl and morphine that currently take 10 to 20 minutes to have an effect.

Another downside of painkillers taking time to work is that cancer pain can quickly subside too, meaning patients end up taking drugs that act too slowly to provide relief, but leave them sedated and confused afterwards. “There is definitely a need for something with a very fast onset for when pain is there. That would be a huge advantage,” she said.

But Colvin warned that fast-acting opioids can pose an addiction risk. “There’s a balance to be struck. In cancer pain perhaps it is less of an issue, but you have to think about it. Not all drugs are taken as prescribed,” she said.

There’s one MAJOR problem with this.  Patents are not given to natural compounds!  There won’t be huge profits to drive this forward without patents.  This will be an interesting development to follow!