Center of Excellence on HIV is expanding

When Jeff Simmons, now 52, was diagnosed HIV-positive in 1991, the virus was still a death sentence for many — and he went to several friends’ funerals.

As he makes plans for World AIDS Day, Simmons has lived to see big changes in treatment and management of HIV, though not without scars. Early on, he battled the virus with the drug AZT (zidovudine), infamous because it had to be taken every four hours to minimize the chance the virus would mutate and become resistant, and because it came with a long list of horrible side effects.

Even after the drugs improved, Simmons gulped down handfuls of pills daily just to keep the virus from genetically encoding itself into more and more cells, turning them into virtual factories where it could replicate itself.

The drug companies keep refining medications to keep HIV in check, and Simmons now takes only three HIV pills, although he takes other meds for a litany of side effects the virus has caused over the years: diabetes, high cholesterol, neuropathy. 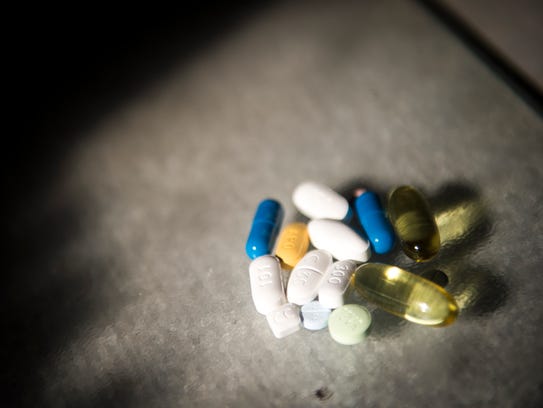 Buy PhotoThree of the 14 pills Jeff Simmons takes each day are to treat his HIV. Other medications are for a litany of side effects the virus has caused over the years. (Photo: Brianna Paciorka / News Sentinel)

But if he were newly diagnosed, he might now get by with a combination of drugs in a single pill, taken once a day, with little to none of the side effects that characterized the older classes of drugs.

That lessened “pill burden” — with fewer side effects — has made a tremendous difference in the survivability of HIV, said Dr. John Narro, medical director for the Centers of Excellence HIV Specialty Clinic at Knox County Health Department. That’s because people are more likely to take the medications, crucial in curbing the spread of the virus, which can mutate rapidly.

“It has become, as long as you play the game right, a disease that is manageable long term and treatable long term,” Narro said. “If individuals get into care, stay in care and take their pills, they can do very well.”

In fact, the national Centers for Disease Control and Prevention now suggests people newly diagnosed with HIV who strictly adhere to their medication regimen and treatment plan could expect to live as many as 50 years with the virus.

“The vast majority of people can live a normal lifespan, can continue to work, can have a family,” Narro said. “It’s dramatically different from the ‘80s and early ‘90s, when this was basically a death sentence.”

Earlier this year, the federal agency launched a national campaign aimed at reducing stigma. “U=U,” which stands for “undetectable equals untransmittable,” is based on researchers’ recent consensus that people with an undetectable HIV viral load — that is, so few copies of the virus circulating in the body that they can’t be found with standard tests — can’t transmit the virus to others. HIV is transmitted through blood, breast milk and sexual fluids.

In addition, people at very high risk of contracting HIV can now take a daily combination of “pre-exposure prophylaxis,” or PrEP, drugs. When taken every day at the same time, the drugs can reduce the risk of contracting HIV through sex by as much as 90 percent — even more if used with condoms. Once difficult to find, it’s becoming more widely available; earlier this year, Walgreens pharmacies started stocking it.

That’s one reason it frustrates Simmons so much to see people newly diagnosed, especially younger people. Simmons has long been involved in the nonprofit advocacy group Knoxville CARES, which provides, among other things, free HIV testing and prevention education. For 15 years, he’s helped plan Knoxville’s annual World AIDS Day event, always on Dec. 1; he’s headed the planning group for the past seven years.

“The younger people didn’t see the death and dying that we’ve seen,” Simmons said. “So they think it’s manageable, no problem — I’ll just take a pill. But some people can’t tolerate the (newer once-a-day) drugs. …

“A lot of people get the misconception that if you’re undetectable, you’re cured. And there is no cure.”

Last year Knox County saw 48 people newly diagnosed with HIV. So far this year, there have been at least 40.

Statewide, between 2010 and 2015, Tennessee had 3,966 newly diagnosed cases of HIV. The majority of them were among men; most were people 15-44 years old. Overall, more of them were black than white, but that varies by region: Only in West Tennessee, specifically the Greater Memphis area, do blacks outnumber whites for new HIV cases. In Knox and surrounding counties, whites account for 87 percent of new cases, with more than 8 percent Hispanics and more than 4 percent blacks. 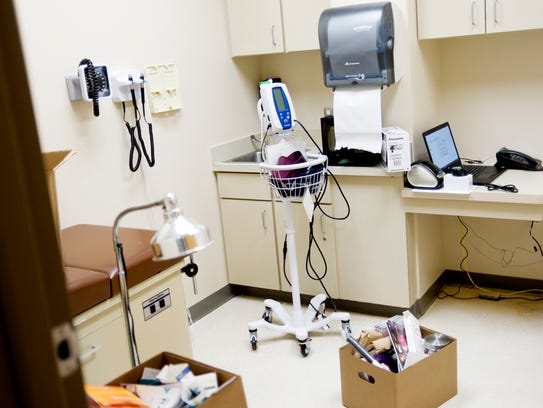 But there’s a growing number of cases transmitted by IV drug use — sharing needles — or sex with someone who shared needles with an HIV-positive person. That leads Narro to worry that the opioid epidemic has Tennessee on the verge of an HIV outbreak among IV drug users — as happened in rural Austin, Indiana, three years ago.

Dr. William Cooke, founder and medical director of Foundations Family Medicine, was the town physician for Austin when he began seeing new HIV cases in his and surrounding counties. The health department traced sexual contacts of the initial cases and found more people infected; by the end of the first year, Cooke had 190 new cases of HIV in a town where newly diagnosed cases per year typically were in the single digits — and where there was no in-town access to HIV services.

Cooke partnered with a number of nonprofits, as well as a telehealth program through the University of New Mexico, to expand access to specialty HIV care in rural Indiana, which included training providers. His clinic developed a comprehensive program to take care out into the community, with nurses and case managers who did testing and closely followed people who were infected to make sure they received and took the medications that could reduce their viral load, stopping the spread.

The state government allowed needle exchanges in some counties, further reducing the outbreak’s spread, Cooke said — a move Tennessee may soon make, as Gov. Bill Haslam signed legislation this past spring authorizing needle exchanges as long as they included other addiction services.

Cooke said about 76 percent of the area’s HIV patients now reach undetectable viral loads — better than the state or national average. He attributes the success to getting the whole community, including churches, involved in battling the epidemic, “tracking people down and building relationships where they are,” even when it means they’re drug users, prostitutes or homeless.

“There’s a big stigma there from an ideologic standpoint,” Cooke said. “Trying to get through that belief system has been a challenge. … Each human life has value.”

In Knoxville, Narro maintained an infectious disease practice at the University of Tennessee Medical Center for years while devoting part of his time to Knox County Health Department, which has housed an HIV Center of Excellence, a regional state-funded specialty clinic that offers medical care and social services, since 1999.

Narro recently gave up his private practice to work full time at the health department, which is expanding the center. The clinic has moved into a larger space and added staff, including a nutritionist and a full-time nurse, to see more patients and to get new patients in more quickly.

There, Narro hopes to also tackle the increasing problem of hepatitis C, which, like HIV, can be spread by needle-sharing. Somewhere between a quarter and a third of his patients have both HIV and hep C, he said.

“Obviously, injecting drugs is a huge route of transmission,” Narro said, adding that there’s “a potential for a significant increase in cases” of both HIV and hep C among drug users, who could then spread the viruses further.

Newer hepatitis C treatments have up to a 98 percent cure rate, Narro said, but they’re expensive. The Center of Excellence can help people get the drugs through pharmacy companies’ patient assistance programs or through the federal Ryan White Comprehensive AIDS Resources Emergency Act, which helps fund HIV treatment for uninsured people.

“The more access to care, the better,” Narro said.

Meanwhile, Simmons will be busy this weekend with events around World AIDS Day, including Knoxville’s “Living with HIV” celebration at 7 p.m. Friday at Rothchild Conference Center, 8801 Kingston Pike.

The event includes speakers, music, the World AIDS Day Trunk, some panels of the Names Project AIDS Memorial Quilt and a candlelight vigil. It’s open to the public.

While the event memorializes those lost to the disease, it’s focused on the living, Simmons said.

“People are living with HIV for a longer period of time, so the prevalence of people living with HIV is more,” Narro said. “We want to get people connected, so they can be plugged into that cascade of care.”

I’ve always said that AIDS is the perfect disease; undetectable until it’s to late (by symptoms), spread by pleasure (sex, drugs) and lethal–but not before it’s had a chance to be spread far and wide by pleasurable activities that we’re all prone to.  Now that we have better ways to detect and treat, we’ve made a huge dent.  It’s known that addiction is a spiritual illness.  I firmly believe AIDS/HIV is diabolical–from the devil himself.  Spiritual warfare with REAL human suffering!