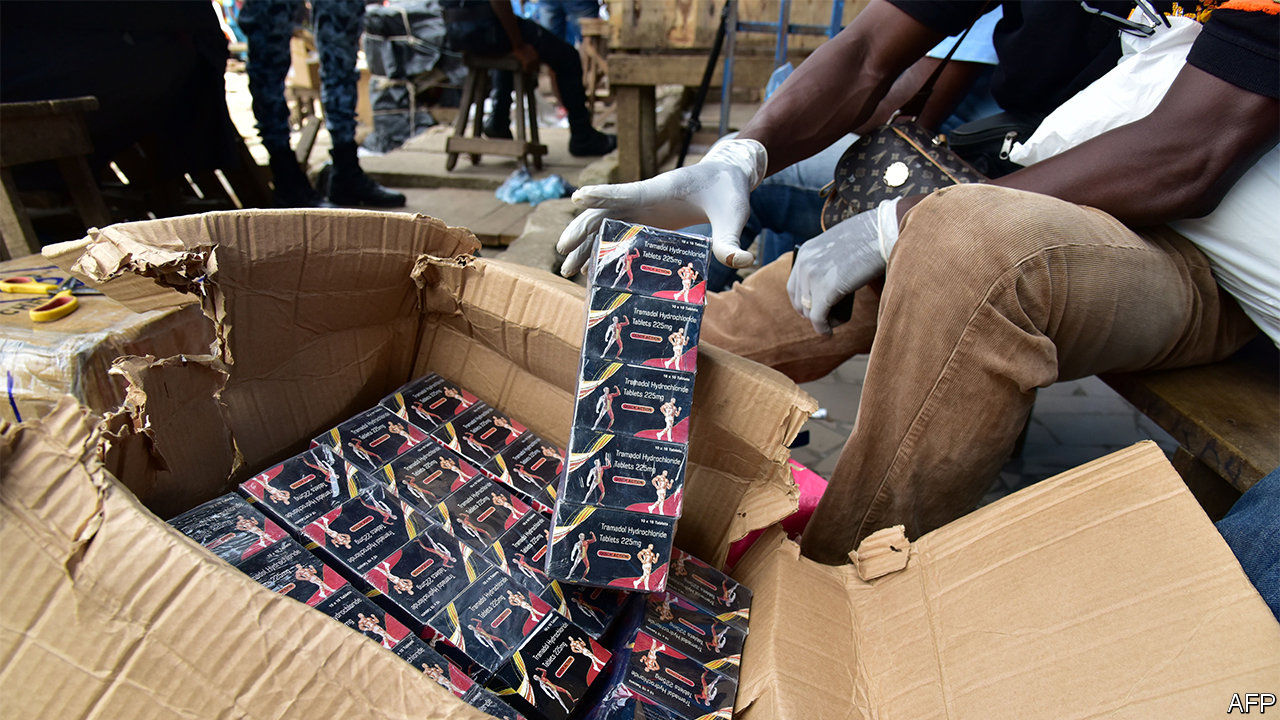 HALF-NAKED bodies writhe on the ground. A man lies in an empty bath, his eyes gazing into space. “No herbs, no medicine. They’ve mixed gutter water together—the eyes are now dirty,” cries out Olamide, a Nigerian rapper. His music video, “Science Student”, has been viewed millions of times. It’s a hypnotic commentary on the chaos caused by the addictive drugs sweeping through his country. But the problem is not just confined to Nigeria. While global headlines have often focused on America’s painkiller addictions, an opioid crisis is raging across west Africa. For decades, Latin American cartels have trafficked cocaine through fragile west African states and on to Europe. Narcotics have often found their way into the region’s conflicts. For example, during Sierra Leone’s war, child soldiers were reportedly given a combination of cocaine and smokeless gunpowder called “brown-brown” that would send them into a killing frenzy. However, many of the hard drugs used in Europe and America are too expensive for those Africans living outside metropolitan areas. This has left a gap in the market for cheap, powerful highs.

Opioids—strong painkillers—have filled that gap. The main ones used in west Africa are tramadol and codeine. These are weaker than their cousins, heroin and fentanyl, but are still potent, especially when combined with substances like cannabis. There are no reliable estimates on how many people in west Africa are taking these opioids, but there is evidence to suggest widespread use across a swathe from Senegal and Mali to Nigeria and Cameroon. The United Nations says that almost 90% of all the pharmaceutical opioids seized in the world in 2016 were seized in Africa (predominantly tramadol, in the west, centre and north). The drugs are mainly manufactured in India. In 2016, following the seizure of 40m tablets, America’s State Department reported that Benin, with a population of just 11m, was the largest importer of Indian tramadol, after the United States.

Tramadol can be used recreationally, but it also can help keep people alert. Boko Haram terrorists are reported to use it so they can carry on fighting. It calms people and allows them to ignore pain and hunger, so they can work longer hours. This makes it popular with the poor. It is also easily accessible; pharmacies sell strips of ten tablets for as little as $0.30. The dosages can be extremely high. An older European might take 50mg of tramadol after a hip operation; a young west African can easily find 250mg tablets, says Jeffery Bawa, a programme officer for the Sahel at the United Nations Office on Drugs and Crime. The drug is not as addictive as heroin, but dependency and crippling withdrawals are a serious issue. Prolonged use can lead to liver failure.

Governments are waking up to the scale of the problem. In May, after an investigation by the BBC into widespread addiction to codeine cough syrup, the Nigerian government banned its import and production. However, most administrations have been slow to react. The World Health Organisation has been reluctant to recommend the use of international controls on the drugs. This is partly because medically useful painkillers can be hard to come by in the region, because of many countries’ import barriers. In the absence of any real plan, west Africa’s opioid crisis will only worsen.

Wow, I thought it was just Khat the stimulant plant leaves that were being abused there.  I guess combining that with the opioids would be a poor-man’s 8-ball!